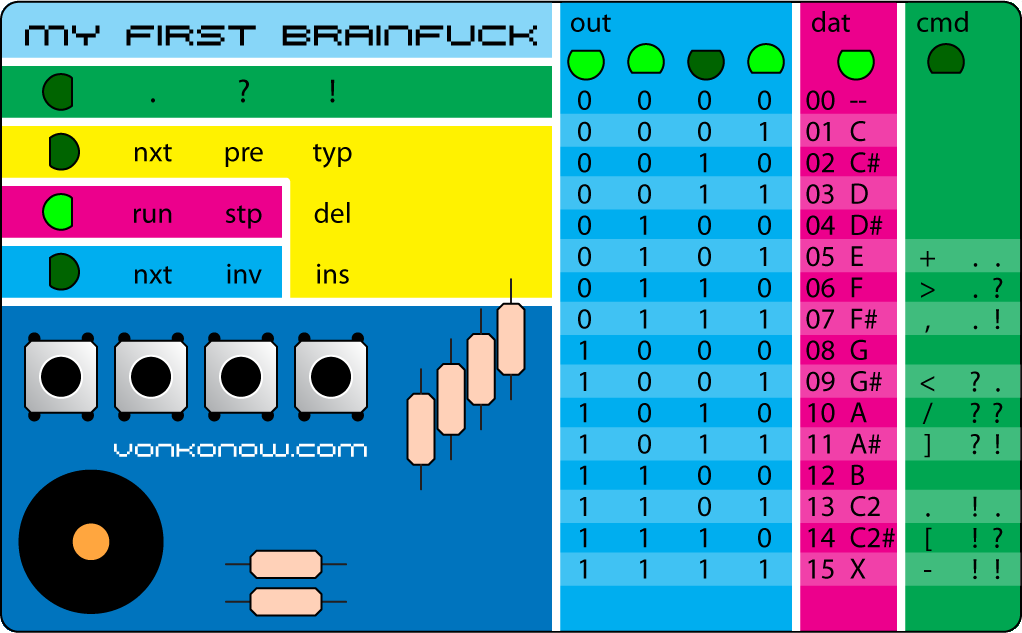 This is the second chapter – describing how to use the computer. If you want to build one, or understand what it is, read the first post: My First Brainfuck computer 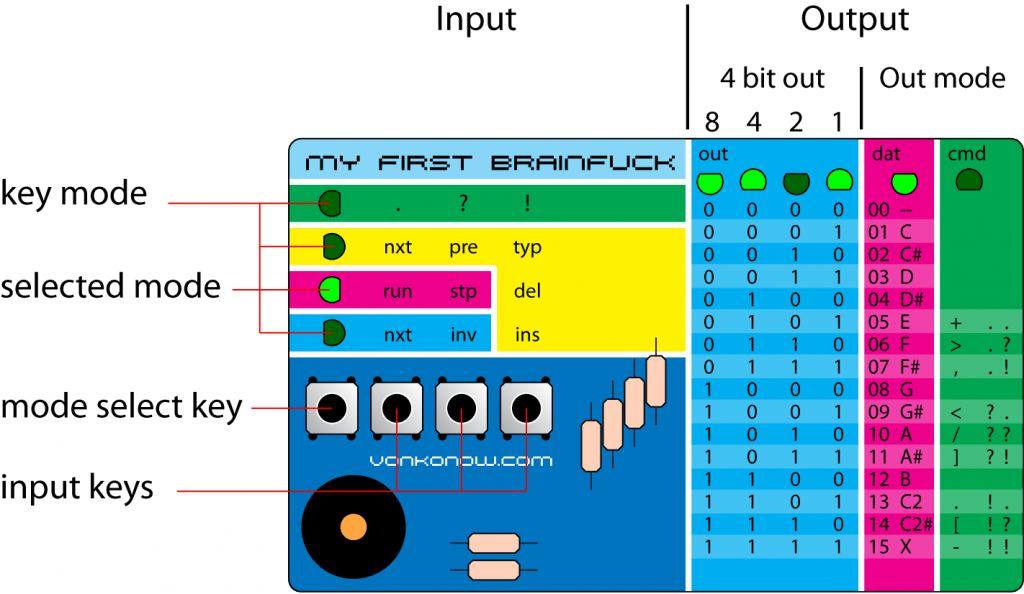 The input section is used to:

The output section is used to:

The menu that controls the function of the keyboard is divided in four groups (rows), each with three functions (columns).

The first group is used to add a new Brainfuck command at the program pointer position. Since two keys are required for a new command, audio feedback indicates if the key is the first or the second. After the second key, the command is saved and the program pointer is increased. In the right green field you can see the key combination for every command. Example: “[“ is written by pressing “!” + “?”. 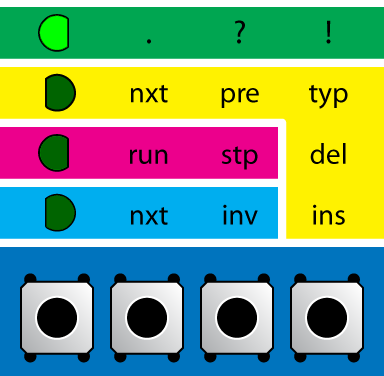 The second group is used to move the program position and to change what is displayed on the output. 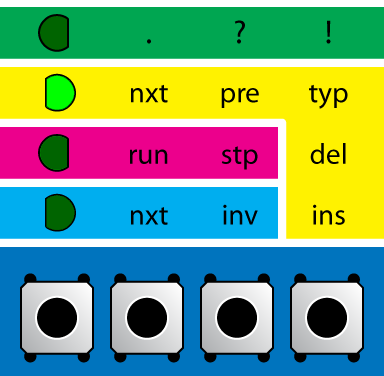 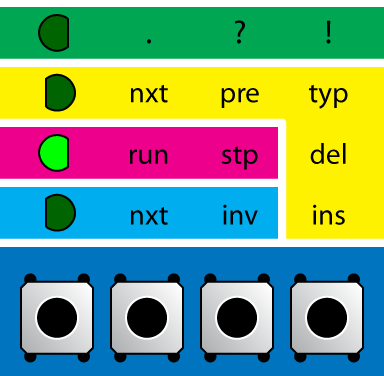 The last group is used to enter data and to insert a new command. The mode LED will automatically indicate mode4 when a “,” instruction is executed. The 4-bit output will show the value of the current memory position and the data is entered bit by bit with the nxt and inv keys 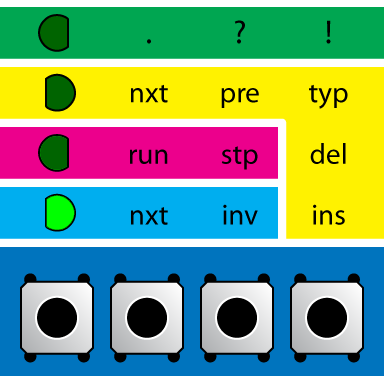 How to read the display

The display is divided in two parts; the output (cyan) and the output type (magenta/ green).

The output can have three different meanings:

To change what is displayed, press the type key on the second menu (yellow field) 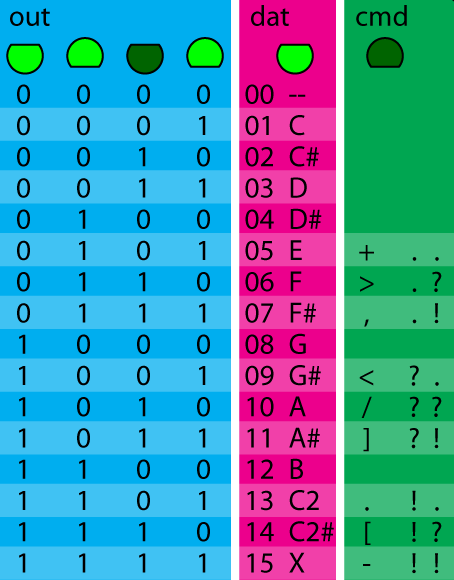 The output will display program output (from a “.” Instruction) when the dat LED is on and the cmd LED is off. The above example means that value 13 is displayed. (The buzzer will also play a C2 note.) 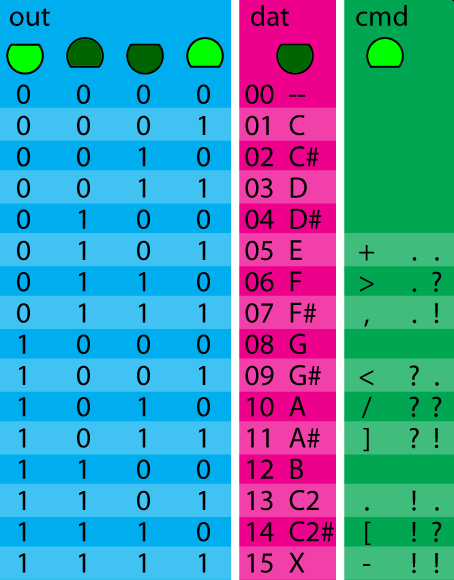 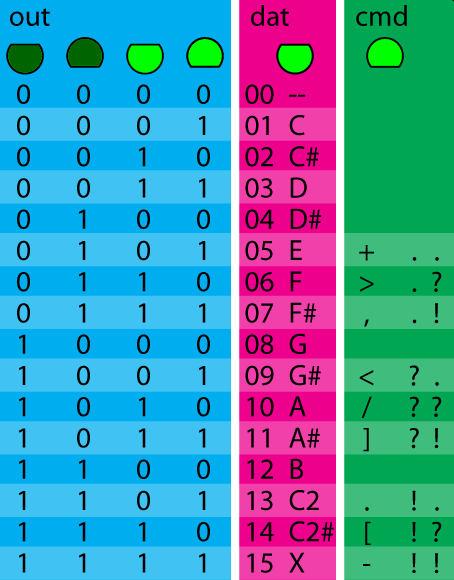 Brainfuck was created in 1993 by Urban Müller (It is based on the language “P” with added commands for input and output). The language consists of eight commands, listed below. A Brainfuck program is a sequence of these commands. The program pointer begins at the first command, and each command it points to is executed, after which it normally moves forward to the next command. The program terminates when the program pointer moves past the last command.

Brainfuck has eight commands, each consisting of a single character:

If you are familiar with C, this translation might help you understand the commands better:

In addition to the eight commands of Brainfuck, I added a ninth command “/” (a version of the input that does not halt the program), in order to be able to write games on the My First Brainfuck Computer. Since ook uses 3*3 combinations of “. ! ?” “??” was available. The “/” command reads the keyboard and writes 0 to the memory if no key was pressed at the execution of the command and 1-3 corresponding to the key that was pressed. If you don’t like extra commands and want to write hardcore Brainfuck, simply ignore this command ;)

Here are some programs that are a perfect start to learn and understand the brainfuck program language:

I thought I was smart and implemented a multiply by 2 algorithm in order to generate the initial memory values for the Larson scanner. The problem is that it actually increases the number of instructions compared to the first version…

(I will publish more program examples in the future – stay tuned)

Now it’s up to you to write your own program!
Please share your work by submitting program examples in the comment field below.

One Reply to “Master My First Brainfuck”