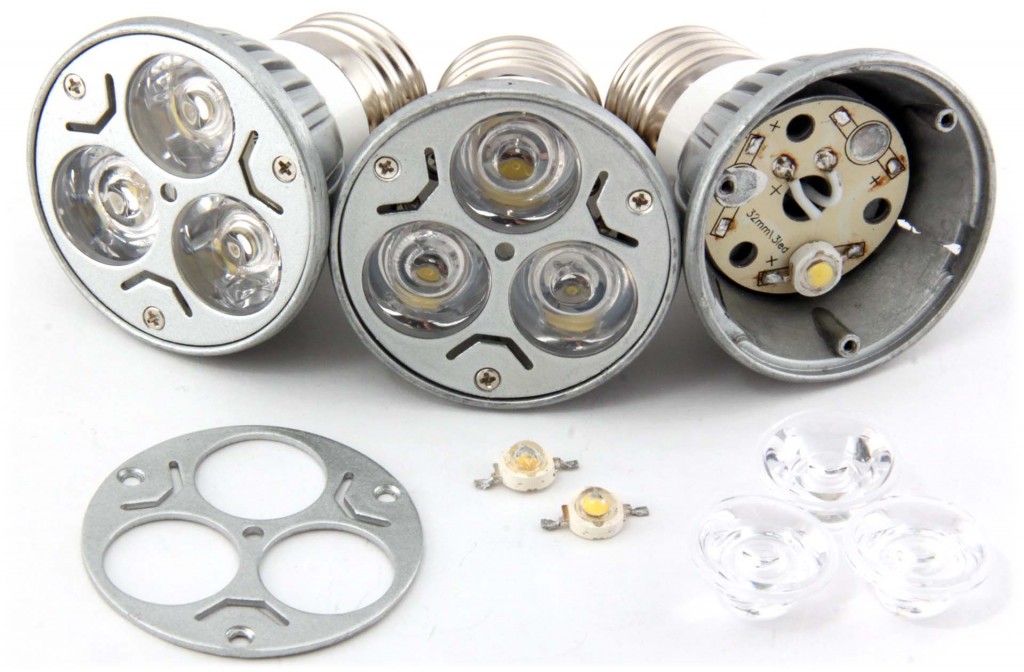 About a year ago I found some really cheap 220V LED light bulbs during a trip to Shenzhen (Huaqiangbei). I bought a dozen and they have been working great ever since. They don’t have the best CRI, but they are still comparable with lamps that cost eight times more. After a year I noticed that three of the lights had gone dark. Instead of just throwing them away I took them apart to see if they could be fixed.

I expected to find a broken PSU (a broken fuse or damaged caps) but to my surprise the PSU still worked, instead one of the LEDs was broken. I could not see which one, but could easily test them using a multimeter or a power supply with current limit. Since the LEDs are mounted in series the working LEDs will not get any power if one breaks. I had three broken lamps so I salvaged the two working LEDs from one lamp and replaced the broken LEDs in the other two. The PCB is mounted on an aluminum heat sink, so you need to have a quite powerful solder iron and use extra solder tin to get good solder joints. (Double check the polarity of the replaced LED since it won’t work if you reverse it). The LEDs are mounted with the backside directly to the aluminum so I added a drop of thermal grease (from a PC CPU) to the backside of the LED to improve the heat transfer. When the new LED was in place, I assembled the lenses and secured the metal top with three screws. It took me less than ten minutes to get two working LED lights from three broken ones. I don’t know how long the repaired lamps will work (I guess you get what you pay for…), but hopefully there was some fault with the broken LEDs.

Even though the lamps are really cheap, it certainly feels better for the environment to bring new life to the lamps instead of just throwing them away (especially if you need to go to China to get new ones:)