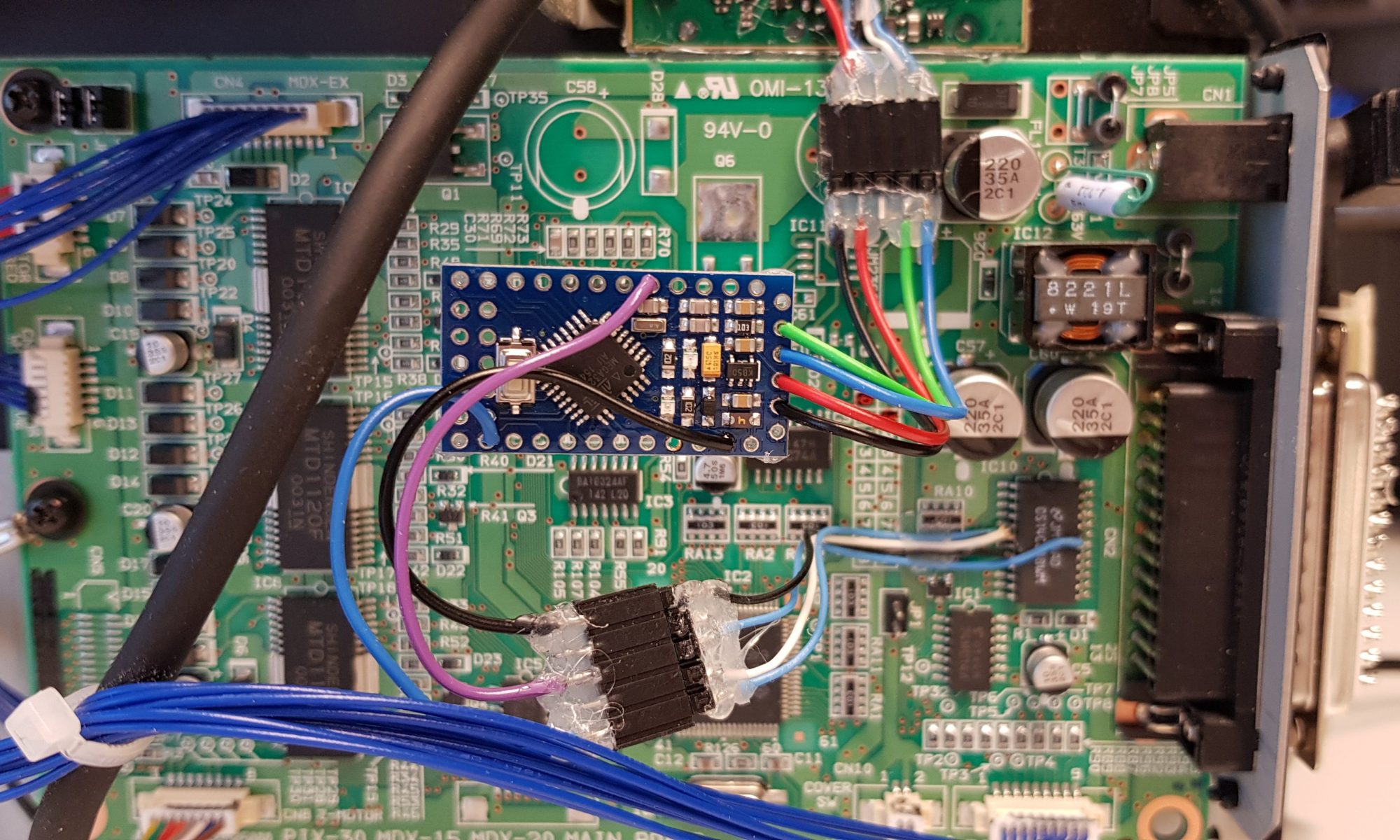 I built a serial proxy to solve the communication issues preventing the mill to work with modern computers. An Arduino mini is used to translate a 19200 serial connection using XON/XOFF (software flow control) to a 9600 CTS (hardware flow control) accepted by the mill.

The Roland MDX mill is a great hobby CNC mill perfect for milling PCBs and small prototypes. I have previously upgraded the mill by adding USB connection instead of the serial interface. It worked with special drivers on previous Windows installations but on Windows 10 it’s impossible to get it up and running. After some debugging, I realized that the timing of the hardware flow control is the critical problem where modern computers and USB2serial adapters are simply too fast for the mill. Another problem is that hardware flow control (CTS/DTS) is not available on most USB to serial adapters.

I considered replacing the printers control card, to directly communicate with the motors using a modern 3d printer controller, but then I would have to rewrite the hole infrastructure of programs that I am using for the mill. When I realized that this was a dead end, I spent way too much time trying to connect the mill to different versions of Raspberry pies with hardware flow control available (this was when I realized that the timing is the problem and the pi is also too fast for the printer).

Since I already had a USB to serial adapter in the mill, I used an Arduino mini (5v version). The Arduino nano would have been used otherwise since it has the USB to serial interface integrated.

After the fix, I have used the mill to create PCBs. I used my html based post processor and the resulting files was sent to the mill using putty, configured for software flow control and 19200 baud rate. It works like a charm!

The Arduino program is quite simple, the serial buffer is monitored and allows more data from the PC (XON) when it contains less than 8 bytes. When the buffer reaches 16 bytes XOFF is sent to pause communication. On the mill side byte by byte is transferred to a soft serial port and the hardware flow control CTS signal is monitored to control the communication.

None of my programs on the PC listens to the mill, so the software RX port is not used (but could easily be added if needed).

I also added optional switches that can transfer pre-recorded commands to the mill. This is great for calibration, where different keys can be used to move the mill to 0,0,0 or 1,1,0 without using the PC.

Since I already had the USB to serial adapter in place, I simply cut the wires and added the Arduino mini in between. In this post you can find how to connect the serial interface directly to the mill (you need to lift the TX pin on the DS14C238 IC and connect directly to the pad)